[Off Grid Money] Silence the Noise

Via our friend and financial advisor:

We’ll see.  This is always true…except when it isn’t.

I’d like to talk about something that is ALWAYS true, however.

That is: Your money is ALWAYS invested; there is never an exception.  If you have money that has not been spent, and will not be spent, then it IS invested…somewhere.

Money is always invested in one of the following:

1)     Currencies (both printable and non-printable).
2)     Companies (both publicly traded and private).
3)     Debt (Lending money to someone or something)
4)     Physical Assets (houses, commodities, collectables).

That’s it – four areas.  Not five or six…but four.

Since the Dow or the S&P have never screamed higher or crashed farther, I thought it was a good time to get back to what really works.

What really works, is getting the big picture right.

So, what do you say?  Let us silence the cable, TV, blogs, print, and news media data, and take a giant step back.

Below is a price chart of the S&P 500.  Notice the line that is slightly moving higher. That is a ‘mean reversion line’ (the core direction).

Notice how the mean reversion line is slightly going up over time. That means, since 2000, stocks have been moving slightly higher, and will probably continue to do so. 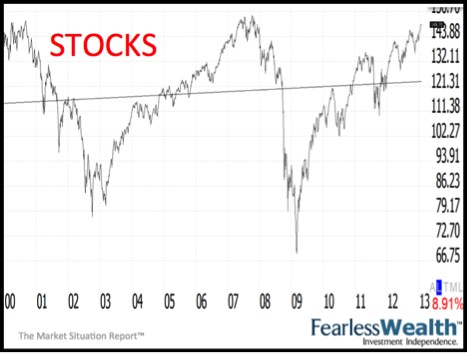 The second asset class that people can invest in, is debt.  People can “lend their money” (debt) to someone or something. Typically, people think of lending as “bonds”.

So let us take a look at one of the most famous bonds; the U.S. 30-year Bond.  See the price chart below, which shows the yield on this bond. 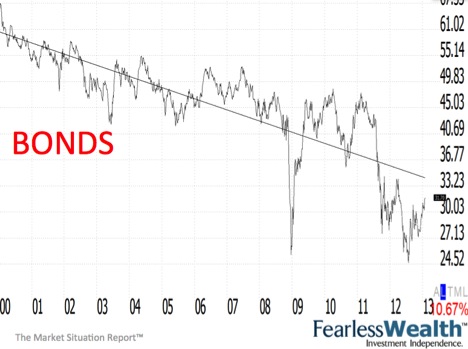 The yield has been falling since 2000, and really started falling in 1982!

Looking at the chart, you can see when the yield just collapsed in 2011.  That was a result of intervention from Ben Bernanke.

The bond market wanted to go up (and it was about to), but Ben Bernanke came in and shut it down.

The result is that people are getting next to nothing from their bonds. Ben Bernanke is forcing people into riskier assets, like stocks.

I am nervous for people who think bonds are safe.  Bonds are not necessarily safe. When the yield on the 30-year stops falling, (and it will stop falling in the next 24 months), then the bond bubble will pop.

And this bubble bursting will be bigger than the dot.com and the real estate bubble.  Take note.

Bonds are not necessarily a safe place.

The chart below is a 10-year price chart of the largest printable currency in the world: The US Dollar. 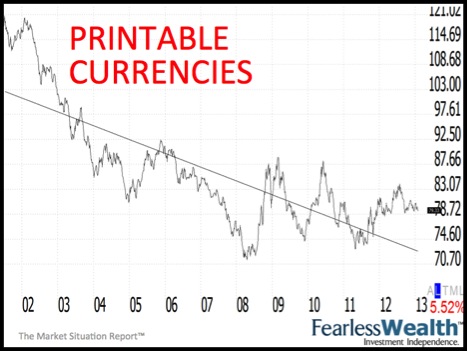 You can see the mean reversion line on this chart – it is falling.

The U.S. needs a cheaper currency; and so does Japan, Europe, Britain and China.

The other currency I want to show you is a non-printable currency.  Below is a price chart of gold from the year 2000 to today. 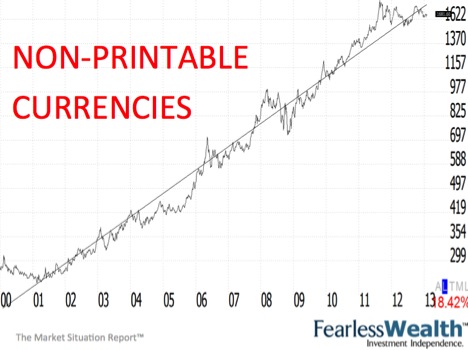 Generally speaking, it is going up.  Do you see that?

If you compare this price chart with the other price charts, you might notice it looks different.

Please, I beg you, keep the big picture in mind.

Lastly, people can invest in physical assets.   There is no really good price chart to represent all physical assets:  commodities, housing, apartment buildings, diamonds, rare artwork, wine, etc., so I will settle on the CRB. The CRB is basically the S&P 500 for commodities. 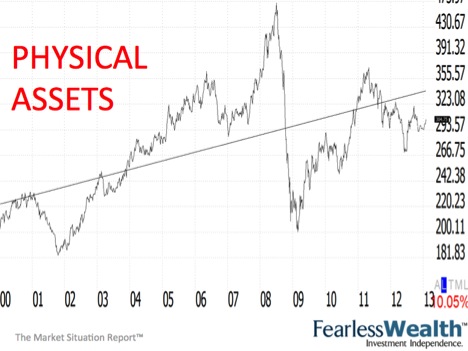 Again, notice which direction the mean reversion line is moving.  Yes, there is a huge amount of volatility, but the trend is still clear.

So, do your best to eliminate the short-term noise by getting the big picture right.

My Monthly Strategy Gathering is coming up on the 12th of February.  It will include live, extensive Q&A, speed investing, portfolio review, and lots of charts for us to look at: Stocks, bonds, commodities, currencies, and real estate.

Being clear about your strategy has never been more important.

Will the S&P 500 break to new lifetime highs on the back of the two trillion dollars of money printing, or will it bounce off of it once again?

You will want to have a strategy that can be prepared for both.

Together, we are growing and protecting your wealth,

PS – People who have secured their retirement and wealth buy strategies that get the big picture right, tell you when to be in and out of the market and adapt to manipulation and intervention. Strategies make people more secure…not stock picks. You may be curious to know more about how we have been protecting people’s money.  Check us out. We now have a trial period with full access.
Click Here.

This site uses Akismet to reduce spam. Learn how your comment data is processed.

Survive an EMP or Mass Blackout with THIS: FREE GUIDE
enter your first name and best email address below: